Your Own Worst Enemy 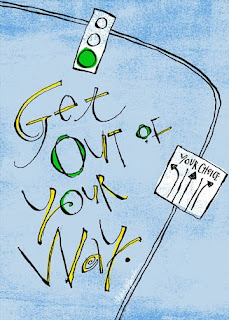 I sat at the blue cafeteria table, staring into space.

I heard the soft footsteps come up behind me, but I didn't feel the need to turn around.  It just didn't matter.

"I know you're upset. Can I explain?"

I choked back the tears.  I didn't want to give the very person who rejected me the satisfaction of showing me how upset I really was.  But my silence didn't seem to scare him off any and he sat across from me anyhow.

"It isn't that you aren't any good, Kristy.  That isn't why I didn't choose you for the group."

"I know I did," he interrupted with a sigh.  Bowing his head for a moment, he grabbed my chin and made me look straight in his blue eyes.  "One day you will understand, but right now all you need to know is that this isn't yours.  It isn't because of your talent, or lack of talent, it is because you have to walk your own path.  And you aren't doing that by mulling in self pity."  My band and concert choir teacher dropped his hand, bit his lip and stood up to leave.

"If I am not walking my path, Mr. V, what path am I supposed to take?" I asked, tears flooding my eyes.

"I am not sure, Kristy.  That is for you to discover."

Every time I watch the hit television show Glee, it brings back my memories of rejection, but most of all the conversation that I shared above.  I wanted to be a part of a small and elite choir.  I had done so well on my audition and was certain that the spot was mine, only to read the names on the list and see that my name wasn't included.  Instead of my name there was a name of another, someone who didn't belong in the group.  She couldn't sing.  And I don't say that to be cruel either..she couldn't sing!  I was devastated.   The instructor of the performing arts program was every-body's favorite and not just because he guaranteed an easy grade, but because he truly cared and went above and beyond.  It was rare that he had a temper, but when he did, you knew he meant it.  And the day he sat across from me, his temper flared just briefly, but not out of anger, but out of frustration.

I never did get to the bottom of why I wasn't the chosen one, except perhaps that one decision could have changed the entire course of my life.

How many times do we get caught up in the competitiveness of the situation?  Interview for a job that we really don't care to have, but when the job doesn't go to us we get angry?  Query a publisher that we know isn't right for the project and yet when the rejection comes, throw out some curse words?  Date someone who we don't really have a connection with, and yet when they call it quits eat ice cream for a week for being rejected?

I used to look around at the other Psychic/Mediums/Paranormal Investigators/Authors and wonder why they got chosen for a television show and I didn't.  Or why they got picked up on a book deal and I was told 'no'.  I used to, until I realized that I wasn't walking my path.  They weren't the enemy, I was.

Do you realize how much more you will get done by creating your own existence!!  By looking around you, you are wasting time in creating your path.  You don't have to be like everybody else.  In fact, you don't want to be like everybody else because that gets boring.  So stop making excuses.  Stop sabotaging yourself.  Stop comparing yourself to others.  And start.  Start what?  I will take a quote from my very wise teacher.  "I am not sure.  That is for you to discover."